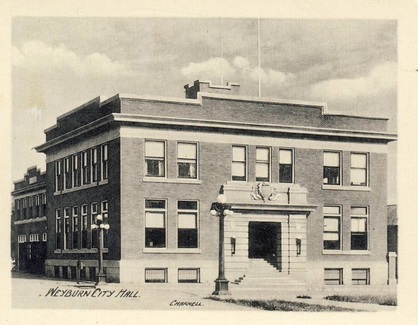 Incorporated in 1920, the first location of the Weyburn Public Library (WPL) was on the second floor of the City of Weyburn’s Old City Hall.  The creation of the WPL took nearly a decade to come to fruition, however, with Weyburn school superintendent A. Kennedy as the major force.  Indeed, in 1914 Kennedy worked hard to secure a “$25,000.  Carnegie Public Library for Weyburn,” but these funds did not materialize.  Even the erection of what is now Old City Hall in 1914 did not lead to the creation of a library.  It is possible that due to the social and economic upheaval created by Canada’s entry into the Great War distracted A. Kennedy and other supporters in their efforts.  That said, at the end of the First World War A. Kennedy lobbied the provincial government and finally presented a petition to the City of Weyburn with the “required numbers” of local residents demanding a library.  The new Weyburn Public Library was located in Weyburn City Hall January 1920.  An initial sum of $400 was approved by the City of Weyburn to buy materials for the new library with the new building supervised by Mr. Williams, the Weyburn City Hall caretaker, who was hired at a “salary of $15 per month.”  The WPL finally left the Coteau Avenue location to its present Bison Avenue site in 1964, which was further expanded in 2000.
History

The city of Weyburn established its first public library in January 1920, in response to the request of interested citizens. Administration of the library was assigned to a board of six appointed members. It was allotted two rooms upstairs in City Hall, one for a reading room, the other for materials. From the time of its origin until the present, the history of this library has been one of expansion and development. Initially it was not a circulating library. At first its materials consisted of reference books, thirty different magazines and some twenty newspapers which could be used in the reading room at City Hall.

In the fall of 1921, the Library Board recognized that it would be a mistake to limit the library to reference books only, so it asked Professor Marshall, the principal of Weyburn Collegiate, to compile a book list, choosing fifty each from Everyman's Library and the Home University Library lists. The cost was not to exceed $200.00.

It was not until 1923 that a circulating library was realized. At this time, users paid ten cents for an initial borrower's card and five cents for its annual renewal; they had to sign an application card, promising to make good any damage or loss of books they borrowed. Books could be kept for fourteen days, and fines for overdue books were charged at the rate of two cents per day.

The Weyburn Public Library was established as a service to the community, and as such, City Council accepted its obligation to provide for its maintenance and operation. Annual grants from the provincial government and donations from organisations helped with operational costs. The minutes of May 1923 record contributions from Rotary and I.O.D.E., Young Fellows and Priscilla Club, Business and Professional Women and the Art Club, and an individual gift of twelve illustrated volumes of Charles Dickens. That year the government grant amounted to $340.60, donations from local organisations to $288.30 and City Council provided $700.00, which with the cash on hand covered the year's expenditures of $1368.40.

During the depression of the 1930s, and World War II, the library adapted to changing times. In 1932, several magazine subscriptions were cancelled to save $39.15, an amount less than which could easily be spent on one book in 2010. In 1933, tenders were called for the purchase of used magazines, which would be sold to the highest bidder; today such magazines may be had for free. In that same year, the salary of Gladys Gawley, the librarian, was $45.00 per month. However, the city asked her to accept a $5.00 per month reduction, with the understanding that she would receive it back in the form of a bonus after taxes came in at the beginning of the new year.

In the 1940s, when the Royal Air Force was stationed at the Weyburn Airport, the London Daily Mirror and the Sunday Times (London) were added to the newspaper racks at the library. These papers were later passed on to the Hostess Club, the local social centre for servicemen. Members of the RAF were given library privileges without the $2.00 fee charged to out-of-town users. The war also made it necessary for the library quarters - at that time two rooms on the ground floor of City Hall - to be reduced to one room, as space was required for the War Rationing Board.

After the war ended in 1945, things began to look up again for the Weyburn Public Library. Space was recovered from the War Rationing Board, partitions were removed, shelving was purchased and new furnishings were procured with the help of local organizations. By the mid Fifties it became evident that further expansion would soon be essential. Like the city, the library was fast out-growing its bounds and was thinking of new quarters. For a time, the old post office was considered, but in 1962, an architect, Mr. Izumi, was engaged to draw up plans for a completely new structure. That building was completed in 1964. An official opening was held on September 10 of that year.

For several years, only the main floor was used as a library, and there was a sense of space very different from the cramped quarters in City Hall. However, it was not long before the need for more space was felt. This problem was resolved when the School Board, which had had its offices on the lower level, moved to another location. This space was transformed into an attractive children's department and the pressure for room on the main floor was relieved.

On the wider provincial scene, change was also on the way, change that would affect readers in Weyburn and across the whole province. The idea of a Regional Library System had been conceived. It proposed making an almost unlimited range of material available to everyone within such a system. Miss Donaldson and Miss Gilroy from the Provincial Library met with both the Library Board and City Council to provide detailed information on the proposed system. Mr. James Porter, who was Chairman of the Weyburn Public Library Board in the Sixties, played a vigorous role in promoting the role of a regional library for Southeast Saskatchewan. He and members of Weyburn City Council contributed much time and effort to visiting smaller communities in the area to persuade them of the benefits of participating in the regional system. Mr. Porter was also Chairman of the Southeast Regional Library Board when it came into being in January 1966.

Over the years, librarians and staff of the Weyburn Public Library have enthusiastically pursued the cross-country trend of broadening the scope of their services. Children's story hours, which were started by volunteers under the sponsorship of the I.O.D.E. in 1962, are now a vital part of the regular children's programming. From one hour on Saturday mornings, this program has grown to four every week. The further expanded Summer Reading Program of 1985 served over three hundred children. Children's films, plays and story-telling by authors such as Peter Eyvindson have introduced children to the beauty and excitement of drama and the written word. Programs for adults have included readings by ex-Weyburnite W.O. Mitchell, former Chatelaine editor and writer Doris Anderson, and local writer Mary Ann Seitz. Workshops have been held to advise and encourage local writers. The Weyburn Public Library has moved far beyond its original purpose of supplying reading material to the public. In addition to this basic function, it has become an enrichment centre for those who want to expand their knowledge and interests under the guidance of professionals. The role of the Southeast Regional Library in making these and other things happen cannot be overemphasised.

Fortunately, Weyburn's City Council envisaged the need for a facility for group activities in the library, and included an auditorium on the lower floor in its building plans in 1962. The purchase of a grand piano, with the assistance of the I.O.D.E., made it possible to add musical functions to its list of programs. This room also serves as an art gallery for travelling shows and exhibitions by local artists. The city's artist-in-residence is responsible for hanging the displays. A plaque on the wall bears the following inscription:

"This room was named in honor of Alice McKinnon Griffin, pioneer and librarian, who served the City of Weyburn as librarian for 21 years. Her dream of 'better things to come' materialized when she turned the first sod for this building in 1963."
Powered by